Liz earned her master’s in Orientation and Mobility from Louisiana Tech University after attending the adult training program at the Louisiana Center for the Blind. She currently lives in Oxford, Miss. and teaches cane travel to public school students.

We know that many students will be traveling with their families for the holidays, so we wanted to share this recent conversation with Ryan Strunk about his travels in India and France. we encourage you to share it with your students, and we are eager to share their exciting or enlightening travel stories upon their return! Please share them in the comments below and we’ll reach out to you to interview them.

Ryan Strunk talked with us about his recent trip to India and France as a blind traveler. Ryan currently works as an accessibility analyst for Target in Minneapolis, where he helps to ensure that the online and mobile Target platforms are accessible and efficient for blind, screen reader users.

Q. Why did you go to Bangalore, India?

Target wanted us to put some projects and processes in place for our new web experience. I went partly to work with people who were building that experience and partly to work with the accessibility team over there to make sure they had a good idea of the new things we are putting in place to streamline accessibility. I was there about two weeks and decided to play tourist for a few days in France right after India.

Q. What travel experiences did you have while in India? Were you able to travel through the city much? 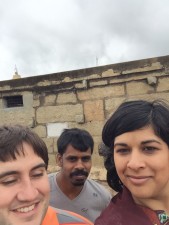 We traveled out in the city a little. I found there to be a certain amount of tourism that you can be a part of and places visitors like to go, but most trips are escorted by locals. From the moment you land in Bangalore as a Target employee, and I imagine many Western companies are this way, you are assigned a driver. When you get out of customs, that driver is waiting for you on the other end with a sign. They become your guide to India. Even if you want to, say, go for an excursion on the weekend or go shopping for an evening, your driver takes you as a personal guide for however long you are there. We spent most of our time with our driver, but there were a couple brief occasions we went out with other people or alone.

One of the things that made it interesting as a blind person is that the traffic in India is crazy. Traffic laws are a suggestion. When you are traveling and want to cross the street, whether blind or sighted, you have three options:

One day, a sighted co-worker and I went on our own to walk through a park, and she was not comfortable crossing the street. She waited for more people to come along to run across together. The first time that I crossed, I was shocked; we live in a culture that respects the red lights and traffic rules. So, as a blind person in America, we can find the street corner, listen to traffic, and when the parallel traffic goes, you go. If the light hasn’t changed, the people on the street still aren’t going anywhere.

In India, as soon as you pass an idling car on the street, they take off. You can feel the wind on your back. They don’t start up slowly, they accelerate intensely! I was thinking, “This is terrifying as a blind person.”

Even though it’s a crazy thing to do as a blind person, I found it is just as crazy for a sighted person to cross streets there. It’s definitely an interesting piece of culture that doesn’t exist here. 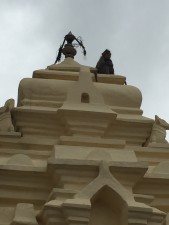 I saw other interesting cultural things. For example, we went to do some shopping, and there are cows. They’re a big part of the culture in India. People take a cow to the market first thing in the morning or in the evening to sell the milk. The rest of the time, cows wander around on the side of the road. I often wondered what would happen as a blind person if you were walking along, would you hear the cows? What would happen if you tapped one with a cane?

As my friend and I were shopping, our driver pointed out a fighting goat chained up right outside a storefront. I again wondered about a blind person walking up to it. What would the fighting goat do if you walked up to it with a long white cane? I’m glad I didn’t have to find out myself.

Q. How did people in India, locals or your team react to you as a blind person? Did you experience culture shock?

There are blind people in India out and about, and there is even a National Federation of the Blind of India. But we also heard stories about the Mother Teresa Orphanage that would take in babies with obvious disabilities who had been abandoned on the street. There is a stigma against disabilities in some circles much more than here. In India, there is a different expectation; we have the Americans with Disabilities Act, and India does not. There aren’t a lot of positive examples of blindness that the public sees in India, so when they see you, they may make assumptions about you that are worse than assumptions made here in the United States.

For example, I left my hotel and went to a bakery in the mall by myself. I got what I was looking for, and I came back, got to the top of the escalators, and forgot how far I was supposed to go. I stepped into a store to ask for directions. He didn’t speak much English, but he understood that I was looking for the hotel. Instead of telling me where to go, he proceeded to latch onto my bicep with both hands and propel me down the hallway toward the hotel. As soon as I heard the music outside the hotel, I told him that I was okay.

I was channeling my inner “Don’t Throw the Nickel”! This is a great speech if you have time to read it. But the crux of the story is this: carefully choose those times to prove you’re capable of doing something independently as a blind person.

We finally got to the hotel, and a guy from the hotel comes out and grabs my other arm with both hands, marching me into the lobby. The first guy finally lets go as the second guy drags me along.

There were a lot of stories like that. A blind co-worker said someone tried to feed him. My wife once had no fewer than three people escort her to the table; one to steer her to the table by the shoulders, one to take her plate and one to clear the path. You experience crazy situations where interesting people are overly helpful here in the U.S., but I saw more of that in India than I have here.

By the end of the week and a half, at the hotel, a lot of people got it. There was, thankfully, a lessening of people who wanted to drag me around if I said, “No thank you.” Everyone was very kind; they weren’t trying to be weird. They were just too helpful.

Q. Did you interact with any blind people from India while you were there?

We had two people who were blind on the accessibility team in India. One talked to me a bit about his experience there. Both guys had some remaining vision and they did not carry canes. I asked one about this and he said that part of it was that he didn’t always feel safe carrying a cane. He sometimes used one in his home neighborhood and at work, but he didn’t like to in new places because he felt it made him a target. The income gap is a problem in India, and he believed that, as a blind guy out in the community, someone might try to take advantage of him. I asked my traveling companion about it, and she said that her family who lived south of Bangalore saw blind people frequently. So, it may have just been this one guy, but that was the story he told me.

Q. What did you notice about the accessibility there? Do you think India is beginning to make things more accessible?

I don’t really know. One interesting thing was there was no braille on hotel rooms, meeting rooms, elevators, or restrooms. That’s one of the things we take for granted here. I don’t know if that’s because there is no education in braille or because of a lack of accessibility. That said, India has 14 different languages, so if you were to write a restroom sign, would you write in Kannada, Hindi or English? That could be one of the things that could be challenging.

Q. How was France different from India and the United States?

We had a layover in Paris, and I’d never had the opportunity to go to France, so we decided to stay there. That was a night and day experience from India. In France, they took disability very, very seriously. The escalators and stairs had truncated domes at the top and bottom…even in the older hotel I was in. All the things you didn’t see in India were in France to excess.

We went to the Louvre one day, and there was a whole display of tactile statues with a braille plaque on each one. But the accessibility extended on past that. There was a special express line for disability access. We got in the general admission line with everyone else, and a guard tried to wave us through the priority entrance. We said, “No, we are okay,” and another guard came over. We said again, “We are okay,” and a third guard came. I thought of “Don’t Throw the Nickel” again.

They told us, “We are letting you and your group in free.” I asked to then donate the price of the tickets and they said, “Oh no, we can’t take money from your kind.”

Between the two countries, you go from no accommodations to excessive accommodations. It is kind of creepy to see that this is what it is like when they take care of you. It was always very well meaning, but it was sort of the opposite end of the spectrum where you are accommodating blind people to a huge degree. People are either unaware about blindness so they will try and take care of you, or they are super aware and will take care of you to a higher degree! I love the middle ground that is the United States, where most people will leave you alone.

Q. Do you think you will do more traveling?

I will eventually, but at this point I’m in no hurry. It’s not cheap for the company to send us to India, so they don’t often fly us out there on a regular basis. For the time being, there is no reason to go again, but I would like to someday. I would be very interested to look up the NFB of India to see what we can find.

Other Posts about International Travel

Liz earned her master’s in Orientation and Mobility from Louisiana Tech University after attending the adult training program at the Louisiana Center for the Blind. She currently lives in Oxford, Miss. and teaches cane travel to public school students.